So what exactly is a Motherboard? What functions does the device serve? The image to the right (or below for mobile users) is a Gigabyte GA-880 Motherboard for review. This is an ATX Form Factor; meaning it uses an ATX style power connection for the power supply. In the lesson below we’ll discuss how to Identify the components (peripherals/connections), RAM clock speed, CPU socket, and the slots: PCI-Express, SLI, PCI, USB 3.0, USB 2.0, and the onboard chipset features of the North-Bridge, and South-Bridge Chipsets. 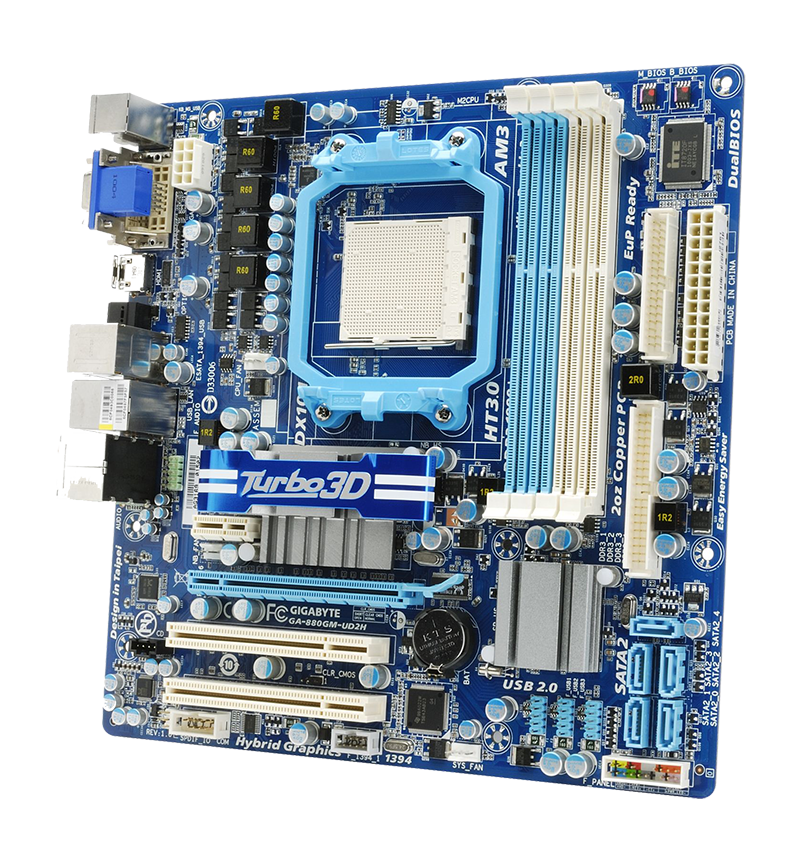 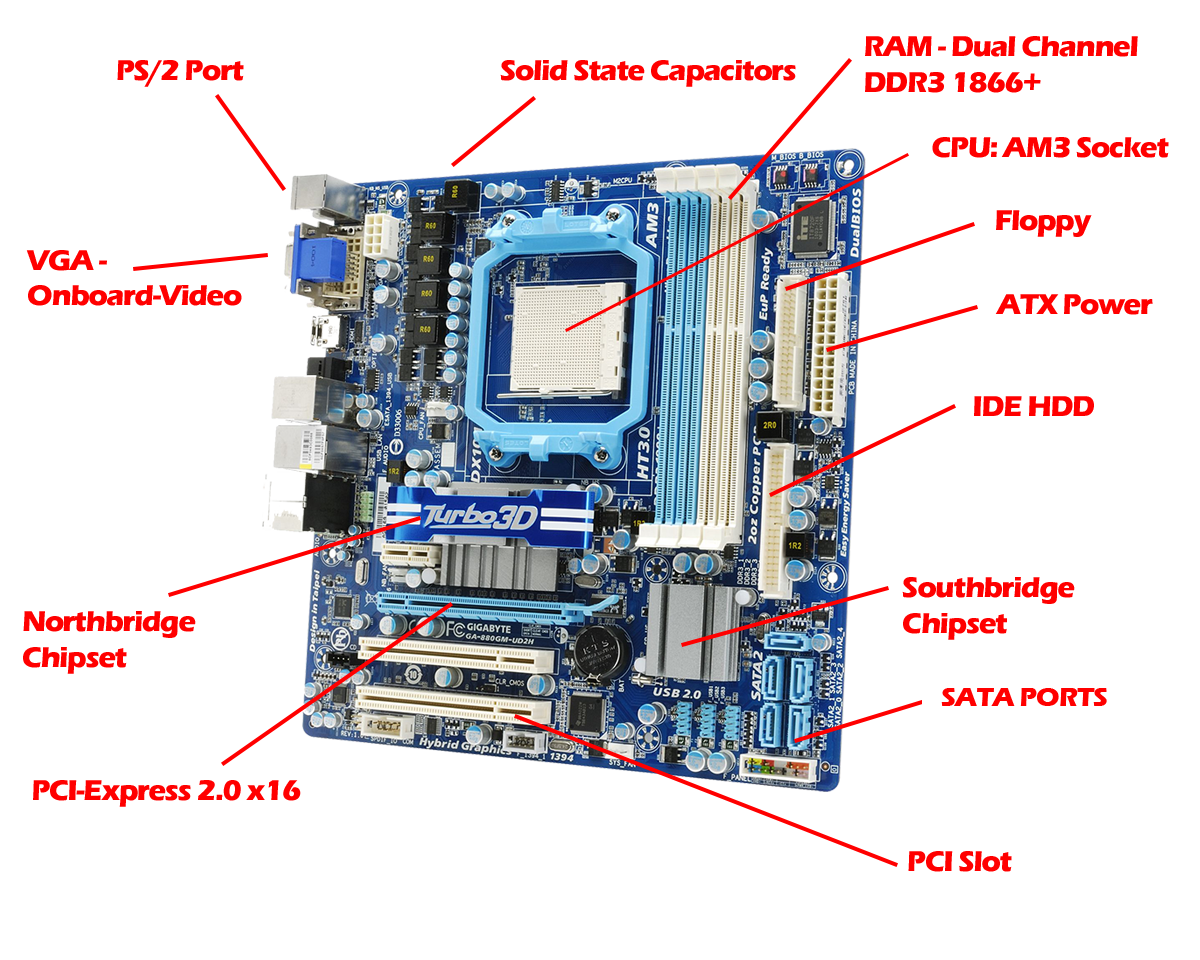 The Gigabyte GA-880 Motherboard is equipped with support for AMD CPU’s Only. This means an Intel Processor will not work with this Motherboard. Some standard I/O Ports offered on this Motherboard are the RAM Slots, PCI Slots, and PCI-Express Slots.

PS/2 Port – Typically used as an interface between a keyboard, mouse, or (POS) Point-of-Sales hardware to the motherboard.

Solid State Capacitor: Contains a chemical element called Tantalum. It is claimed that SSC’s do have a better tolerance to higher temperatures vs electrolytic capacitors.

IDE: Known as Integrated Drive Electronics (IDE) is the old technology interface for connecting CD/DVD Drives, and Hard Drives. Speeds were rated as ATA-66,ATA-100, and Ultra-ATA-133.

RAM: Or Random Access Memory is a data storage chip.

AMR: The Audio Modem Riser slot was an expansion slot for modems and sound cards during the Pentium III up to AMD Athlon time era.

Windows 7 starter only supports max of 2GB/RAM as where Professional and newer support 192GB/RAM.

The Central Processing Unit or Processor is a contributing factor towards computer performance. Here are some key factors to CPU performance: Amount of Cores, L2 Cache, L3 Cache. The amount of cores can range anything from one core (Single Core Processor) to Dual Core, Quad Core, and 8-Core/6-Core CPU’s.

Memory also referred to as RAM is simply a buffer zone for processing data. The RAM helps reduce Hard Drive use and can impact system performance substantially. Most often we see RAM usage going up when opening large format images, and demanding applications/games. Solid State Hard Drives (SSD) help as well. Because a typical Hard Drive has platters that spin with a motor you’re literally waiting on physical moving parts; with Solid State Hard Drives the data is stored in Solid State; meaning like a flash drive. Back in the late 90’s you’d still hear about 32-PIN and 72-PIN SIMM Memory. I recall purchasing 32MB of EDO 72-PIN SIMM RAM for a total of $70.00 in the early 2000’s.

The Southbridge Chipset on the Gigabyte GA-880 Motherboard is an AMD SB710 Chip. This could be considered a less direct pipeline to the Processor meaning it handles less demanding portions of the motherboards I/O (Input/output). the SB Chipset handles: IDE, SATA, USB, Ethernet, Onboard Audio, and the CMOS Memory.

The PCI port is a generic port for adding features to your computer; similar to USB ports in a way. PCI-Express is more geared towards handling more demanding software like 3D-Rendering or Graphics like CAD software – AutoCAD, and OpenGL, and Microsoft Direct X which is designed more for gaming.

Now that you’ve learned some basics about Motherboards take a look around Newegg.com and take look at the motherboards, see what features they offer.